7 Tips to Sell Your Home Faster to a Younger Buyer

7 Tips to Sell Your Home Faster to a Younger Buyer

Should we order a bottle of Chianti too?
I had heard of this method of choking out weeds before but just stumbled on a Fine Gardening*that gave this rather amusing name to the proceedure. It is similar to using a fabric shield to prevent weeds but if you have moved in the last ten years you probably have card board boxes languishing in your attic and free beats most any other price. Also some authorities seem to think the fabric can be problematic. Plus cardboard is so much more GREEN !
I did a modicum of weeding but by no means got all the yucky stuff out. I then started placing cardboard on the two beds I was working on. Ok I even used a small real estate sign but don’t tell Steve my partner! Then I began to liberally water down the cardboard until I got tired of doing that but probably the more water the better. Then I laid down about 3” of mulch. I used Cyprus but pine straw or anything that is appealing will work. My plan was to wait for several months to let the cardboard decompose. Generally that takes about 6 months. Not going to happen! Have those beds look like that for six months no way!  So after about 2 weeks could not stand how it looked and went into phase 2 get those plants in the beds….
I removed the mulch in the areas the plants were going to live and then used a box cutter to make large X’s to pull back the cardboard. Piece of cake the cardboard was pliable and the ground was easy to dig into…..I first made sure to unwind any roots that were knotted in tight circles pulling  those out to allow them to grow and smoothed soil around them gently. Final step was to smooth the cardboard around the plant leaving a bit of space and then covered the area with mulch….. 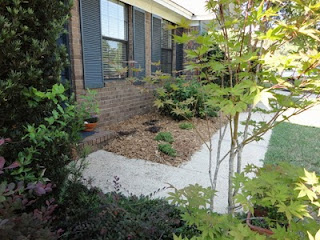 I have since learned in another article that planting immediately is ok too! Whew! So let’s all have a glass of Chianti and watch our garden grow!
﻿ ﻿


For any type of Realty Issues please go to http://www.greatercrestviewhomes.com/ or http://www.theguthrieteam.com/
Posted by Annie Guthrie at 4:28 PM

Annie Guthrie
Searcher would describe me perfectly...I never want to stop learning, always want to grow spiritually, and hopefully I can adopt more folks to become part of my chosen family......